Packages for the Homeless – “Help for Victor”

Note:  I’ve decided to chronicle my efforts at giving packages to the homeless because; 1) It’s so simple and rewarding, and 2) Maybe others will try it.

I brought three packages for homeless with me to Harvard Square today.

The first homeless person I encountered was a lady sitting on the ground.  When I handed her a package she perked up with surprise, enthusiasm and appreciation.

The second homeless person I found happened to be totally Woke, and displaying a sign that said “SKOLSTREJK FOR KLIMATET.”  I thanked him for his Climate Strike and he cheerfully pointed out it was a replica Greta Thunberg’s original sign she displayed outside Swedish Parliament just last year.  He also pointed out his Extinction Rebellion sign, and was happy for me to take his picture as part of my activism.

Then I still had 15 minutes before my bus, so I wandered into Cambridge Common figuring I’d find someone there.  I passed the five homeless folks enjoying a boisterous conversation with each other and found a lone man having a contemplative moment on a park bench.  I offered him a package and shook his hand and told him I hope he has a nice day, and he asked me my name.  So I told him and asked him his.  His name is Victor and he had a very sweet demeanor.   Because I have benefitted from a lifetime of good instincts about people, I sat down and asked him what he really needs (beyond a little package of snacks and socks).

I asked him more questions with simple interest, and he told me his circumstances, including that he suffers from alcoholism.  He did this without complaint, entitlement or self-pity, although he did wonder if there was something he did in his life that is causing him to be punished  for some reason.  He told me that somehow money is not the problem, but that he doesn’t have a place to spread out and put his things, and that “I just feel like a part of myself is missing.”

I empathized with him and told him I wasn’t familiar with any resources for him but that I recently learned the most direct way to contact our City Council, and that I would be happy to write an email on his behalf.  So I took out my phone and did that, including a picture which he agreed I could include. 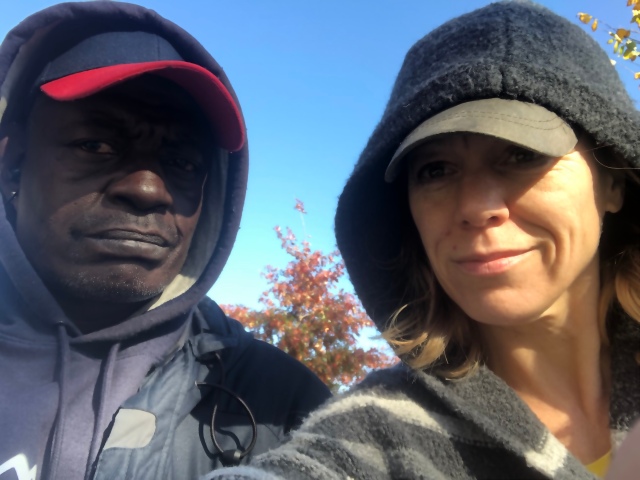 We shared a couple of hugs and he told me how happy he was that I took a few moments out of my day to set down and talk with him.

THIS IS OF COURSE THE POINT.  And for all purposes the end of the story.

But wouldn’t you know that within and hour, not only had (my favorite) Councilor Zondervan responded with the contact for our Cambridge Multi-Service Center, (for which Victor already has an appointment coming up) but Marc McGovern, our current Mayor, wrote this:

Please have Victor come to the Mayor’s Office at City Hall on Monday at 10 am. Thanks.

Frankly, I”m thrilled.  I have Victor’s phone number so I am excited to text him the news, and perhaps accompany him should time allow.

Update:  In fact I just texted him and he would like me to come with, so… to be continued.

PS:  I find it noteworthy that our town’s ELECTION is the following day, and here our Mayor is making time for a constituent who by definition can most likely not even vote.  VERY cool.   But we knew this already.