So this morning I go to change their bedding before getting the kids off to school.  It’s around 7am when I bend over to get some fresh shavings and what do I see?  A TINY NEWBORN BABY BUNNY ON THE FLOOR.

“OH NO!!!” I cry, using a paper towel to collect this pink, furless, helpless, eye-shut,  vaguely wriggling, mouse-like thing up off  the floor.  I know my bunny is young and inexperienced, and obviously hadn’t gotten any… well, pre-natal support from me.  I was warned not to expect too much from this young bun if she DID give birth (or “kindle,” to be precise).  But neither was I exactly expecting a single baby chucked out the bunny house onto the floor.

I racked my brain for a small box to separate mom & baby into, settled them in with lots of bedding, food and water, and called/emailed/texted my bunny vendor farmer friend.  I keep checking the compost, making sure I had not missed a baby when I changed out their bedding.  The kids wake up curious.  I start to explain and then see ANOTHER baby on the floor.  (Don’t know how I missed it before.)  Aaack!!  This one is kind of brownish.  I add it to the new nesting box, ask Dear Husband for extra help with morning duties, and hit the shower.  DH is loving this drama by the way, naturally (not. “Animals!” he grumbles, charitably).  I’m waiting for a call back, but of course in my frantic state I misplace my PHONE.  I come out of the shower and notice something wiggling on the floor down the hallway; ANOTHER ONE!  (Brownish-grey.)

Now it feels like some kind of sick, Baby Bunny Horror film.  (Cue PSYCHO music.)  So I’m yelling at my son:  FIND MY PHONE!  And LOOK FOR MORE BABY BUNNIES!”

I finally connect with my new bunny friend and the news is not encouraging.  Three is actually a pretty healthy litter size for a bunny this small.  (ASSUMING we found them all.)  But because she hasn’t ripped out the fur from her belly or made a nest, there is little chance she’ll nurture the offspring.  (How are they gonna find a nipple in all that “fluff”?)   They might survive six hours or so without her care.  And they are nearly IMPOSSIBLE to hand feed at that stage.  All the same, if there’s any chance she’s going to get into it, what they need is peace and quiet.  So, taking my son to school I explain that the babies are very unlikely to make it; that Fluff is probably not ready to be a mother.  “Then why did she get pregnant?” he asks.  (!!! Good point, as usual.)

Coming home later, DH has actually done a great job of observing and a bit of minding.  Turns out she *had* ripped out some fur (a tiny bit).  Also, maybe it was Auntie Nutter who threw them out of the house, Not the Mama.  For that matter, Nutter keeps trying to get into the nesting box and Paul did a great job of blockading the two factions of bunnies into new respective places.  He also noted that Mamma Fluff tried pushing one baby back out of the nest, herself, and that the little guy wasn’t looking so good.  (The smallest, kinda grey one.)

When I got back she didn’t seem particularly bonded to her babies.  I moved them into a pile (with chopsticks this time, like little wontons).  TURNS OUT, according to more research, that mommy bunnies don’t *sit* on their babies to keep them warm (like a chicken or anything), or even hang out with them that much.  They actually nurse their newborns for only about FIVE OR TEN MINUTES in a day!   The babies should be in a cuddly pile inside the nest she made.  AND, according to one report, they can survive up to 72 hours without nursing!  ALSO, it’s actually okay to handle them.  So, although I thought they were goners… maybe not!  Honestly one of the most encouraging signs -as far as I can tell- is that she has made no attempt to EAT them.  Crazy right?  But actually pretty common when new mamma bunnies feel threatened.  And between Nutter, the cats, me, the kids… Fluff has had plenty to feel uneasy about.  Also, a “peanut” baby is a common member of a litter; like a runt but smaller and almost never viable.  Do you know how long their gestation period is, btw?  Four weeks.  Yep!  That’s it.  No wonder they can “breed like rabbits.”   Fluff was 3/4 of the way there when I got her last week.  (And my farmer friend felt *terrible* that she missed it; having noticed her belly was “big,” but didn’t seem pregnant.   I told her not to worry AT ALL.)

Anyway, this afternoon the boy and I checked in the nesting box.  She actually seemed pretty cozy in there.  Not trying to get out, and even got defensive when Nutter tried to pop her head in.  Two of the babies looked pretty healthy and vigorous!  The peanut, not so much.  in fact, he was listless, and well, not living anymore.  Gavin was interested and not too devastated.  We removed it, examined it, and discussed it.   While my mind has been inside a cozy, tiny box with fluffy and not so fluffy baby bunnies all day, it has actually be raging snow outside.  I suggested the best way to return baby Peanut to the earth might be through the compost.  Gavin was shocked, and wouldn’t stand for it.  So we got him a tiny box and labeled it and put it in the freezer, purportedly ’til we can bury him in Spring.  (I’m sure my chef hubby will be thrilled about that too.) 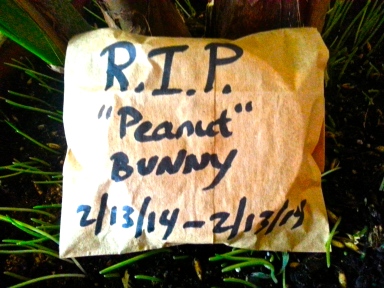 Now it’s 8:30pm and Gavin is checking the nesting box himself.  “Mamma?  One is wriggling around a lot, and one is not moving.  I looked at its head and it’s not moving.”

“Now all we can hope is for that last baby bunny to live.  He sure has lots of wriggles!” says my boy.