PART I:  After reconciling with my husband over his unexpected absence putting in way more work hours than I understood would happen, then taking all night until 6:15am making Christmas Magic… my efforts were rewarded at 7:45am when I opened my eyes to my Boy beaming his face into mine, “SANTA CAME!!!”

“Oh Holy CRAP!” I thought. Did we really screw the pooch this badly on managing expectations? What he was actually holding in his hands couldn’t have been a crappier “gift.” It happened to be a PACKAGE OF BABY WASH CLOTHS. OMG. I might be sleep deprived but I had to think fast. I told my son I’m sorry but Santa doesn’t bring gifts to children that their parents don’t give permission for, and that he would have to be a lot older (THAN FIVE) before starting on his own electronics. Optimistically, he offered that he could put it away somewhere safe until he was older, “Like seven… or eight or something?” I then had to explain that electronics evolve quickly and… yada yada. Amazingly, he forgot about that package for a while. 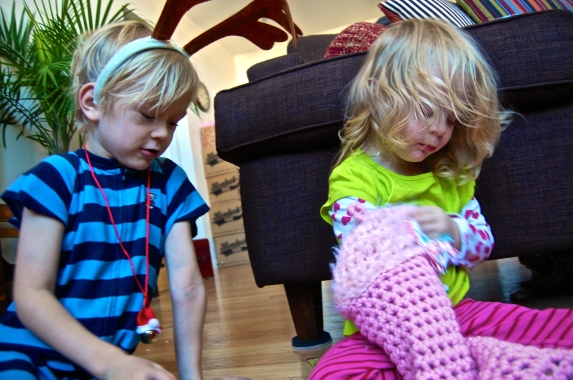 My kids slowly poked through their stuff. After stockings, opening a present here or there. Playing with it for a while. Then drifting off somewhere to play with old toys they already have. We put on some more coffee. This was obviously going to take a few days.  Fine!

One of Santa’s packages for Gavin was some clothes.  I did not know how this was going to go over, although I did think Santa had excellent taste.  (Just sayin’.)  Amazingly, Gavin agreed; “Awesome!” he said, immediately getting dressed into them out of jammies.  Then we get back to the pack of wash cloths, Gavin opens them and I casually say, “Huh!  How did Santa know we needed those?”  Gavin tosses them aside and declares, “I guess it’s a Christmas Miracle!”  I guess so too, indeed. (o:

Here is ClaraJane “opening” a present, by clipping off little bits of ribbon with her new kids scissors.

PART II: My mom, sister Amanda and her crew generously made the Christmas Trudge over to OUR home this year, and in the interest of time had forgone both cleaning up at her house AND eating.  Consequently, we were all sleep deprived, over stimulated, under nourished and using all our low-blood sugared strength not to gouge each other’s eyes out.  (I’m totally exaggerating, but you get the idea, AND you know what I’m talking about!)  She even brought over one of the main dishes for brunch (thank you James for the blueberry french toast.)  And, in his inimitable way, it was once again also my husband to the rescue, with salmon gravlox, potato pancakes, manchego cheese, cave aged cheddar, coffee, mimosas and more.  More Christmas Miracles!

Thankfully after food, we still had a good hour to relax and enjoy, which we did.  For an hour.  Then it was Swirling Time.  Off to the next venue; my husband’s sister’s down in Plymouth.  Resisting transition, my son protested, “I don’t want to go!”  At the exact same time as I hear myself saying, “Talk to your Dad!”  I hear my husband saying to our daughter, “Talk to your Mom!”   “What is it honey?” I asked her.  “Mamma I need five doyyars!”  Hmm, I thought about it. “Sure!”  Whatever keeps us moving forward.  I gave her the jar of change to diddle with and she was happy.  Me too.