A Jenny the Juggler Show in Tewksbury MA 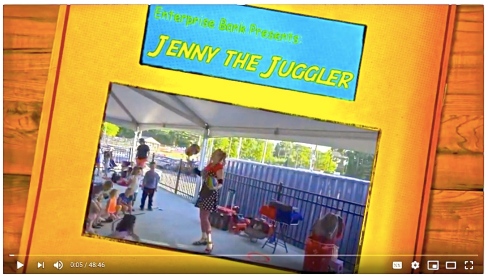 So, here in unedited, unadulterated glory is AN example of my show, generously filmed in its entirety by the local TV station in the Town of Tewksbury, MA.

It’s neither my best show nor my best audience, perhaps due in part to my failure to get my sound system to work,  which is why my voice –recorded intimately by the camera man– is on the forceful end of end of the spectrum.

PS:  I generally avoid viewing footage of my own show at ALL costs.  Somehow I was able to get through all of this one (over like, 10 days, lol).

PPS:  FWIW actually they did edit out the parts where:

Note to Self:  I need to write a song to directly serenade (white-man, sometimes white-mom) fuckers for that specific circumstance right in the middle of my goddamn show.  #BLARGH!!!

PPS:  I know I know; “patient” children’s entertainer throwing down the F-bomb everywhere.  WELCOME TO MY BLOG!