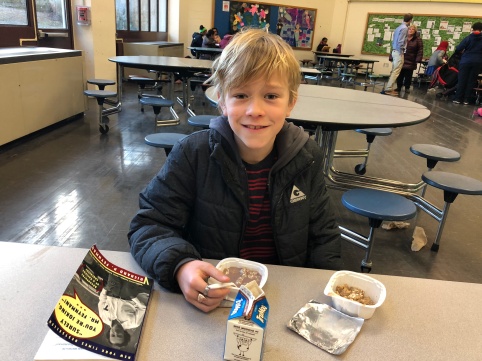 This morning at school breakfast I accidentally hazed my son in front of his friends.  But he loved it.  Turns out he’s been sniffing and snuffling the past couple days, fighting off a cold and developing a red nose.  Meanwhile ClaraJane and I have prepared an elixir for this very circumstance in the form of our annual batch of Fire Cider; a daringly hot spicy medicinal drink made from garlic, onions, horseradish, ginger, tumeric, cayenne pepper, cinnamon, lemon, lime, orange and rosemary marinated for a month in organic apple cider vinegar with honey “to taste.”

ClaraJane herself topped off a small bottle to bring with us today.  (She doesn’t use the stuff but is proprietary about it.)  I drank half on account of my runny nose and to stave off any hint of that ominous TICKLE one gets in the throat when falling ill.  Grr!  Meanwhile Gavin seemed so happy at the cafeteria breakfast table surrounded by schoolmates, I wasn’t going to interrupt.

I explain it’s a medicine made from foods to keep you from getting sick that’s as spicy as hot sauce.

And you know what?  He does.  Uncorks the bottle.  Chugs it.  Like a boss.

Everyone enjoys his antics as the burning sensation spreads down to his stomach, and they just as quickly peel off to class.  Gavin stays behind to bask in the glory of having done it, and even lets me take his picture while finishing breakfast.

Daddy is in the kitchen per usual and when I tell him what Gavin just did he looks at me with a certain stunned dread.  Because now, if his nine year old SON can handle a shot of ClaraJane & Mamma’s Fire Cider… there’s that much less excuse for Daddy next time he ever starts to feel sick god forbid.

We’ll just have to wait and see.

Then ClaraJane has us all walk to class together; Invasion Oberhauser-Style. 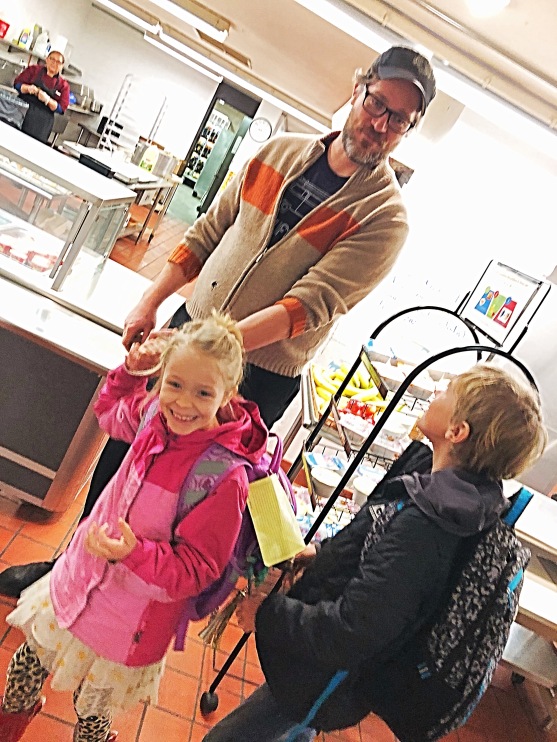 Daddy looks at his son with perhaps renewed respect.