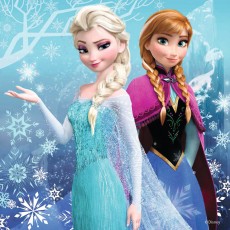 After staying up a tad late to put the finishing touches on ClaraJane’s ELSA cape last night, the kids’ outfits were ready for “Dress Up” Day.  We’ve already made it through Book Character Day,  School Pride Day, and Western Day (even if the substitute teacher told Gavin his coonskin cap was not an appropriate choice for “Western Day,” but that’s another story!)

And though Elsa is a Disney Princess character, even the principal herself had pointed out an Elsa as an example of “dress up” during the Peace Assembly on Monday. I had to clarify this with Gavin when he protested that his sister was going to look strange at school as the only one dressed as Elsa, informing me that he now “H-A-T-E-S” the movie Frozen.  I assured him she would not be the only one, and even wagered him a bet.  Being six years old he proved unprepared to wager anything he might lose, so I made it a win-win bet for him; $10 if there are no other Elsa’s, $5 if there are no Anna’s, otherwise 25cents per Elsa and “A dollar an Anna.”

[Secretly I know he still likes Frozen, because Frozen is AWESOME!  And collectively we are not sick of it in this family because we do not have our kids abjectly *binge* on Disney Movies or anything else even if it would be more convenient to us parents to let them do so.  More digressions for yet another imaginary post.] 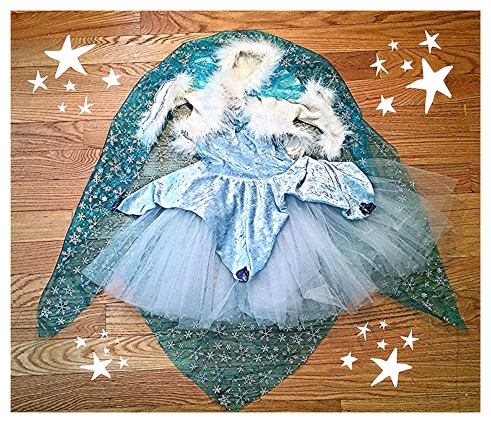 OK see what I did here?  I took an old hand-me-down Cinderella dress we have (that conveniently doubles as an Elsa dress), a hand-me-down cardigan sweater, and the glamorous sparkly snowflake fabric I got off eBay ($12) last fall with the intention of making her cape.

I zig-zag sewed a line around the sweater to keep it from fraying before chopping off the excess parts to turn it into a “shrug.”  I cut the sleeves at an angle so the ends would dangle down in a teardrop shape (perfect for dipping in soup), and left one button at the top for fastening.  The real Elsa does not wear a sweater, not even a shrug.  And certainly both she and my daughter insist “the cold never bothered [them] anyway.”  But Elsa’s mom is dead, so she’s not around to make sure her daughter puts on a sweater in wintertime.  No such luck for ClaraJane.

Next I folded over and gathered one end of the sparkly fabric and sewed it around the shrug neckline for the cape, and glued white sparkly marabou fuzz around all the edges to give it that wintery, princess look.  I also modified the flower that sits on the, er…cleavage part of the dress.  (Were I real seamstress I’m sure I’d know the term.)  I tarred and feathered it with glue and sparkles, cut the petals into snowflakey shapes and then hunted around the house for a sparkly little piece of notion for the center, and alighted on the crystal flower from an old broken toe ring in the bottom drawer of my sewing table. 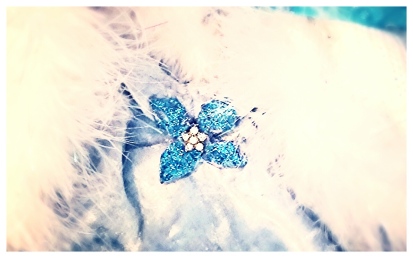 Lastly I trimmed the bottom of the cape into the kinda fleur-de-lis shape, short enough to not get tripped over at school, but just long enough to tickle the ground behind her, wherever her precious feet may tarry.

Morning came.  Our handsome Boy dressed up in his finery without resistance, as did our handsome Girl.  UNTIL…

It was almost time to go, and ClaraJane blurts out, “I don’t LIKE my cape SHORT!  Waaaaah haa haa haa HAAAAAAAA!!!…”  And off comes her dress and cape into a heap.   The glory of this story is that I did not get upset.  Somehow I remembered that she is THREE, and this kind of nonsense is typical, classic and to be expected.  Daddy helped her change while in my imminent motherly wisdom I collected the discarded rags into a (matching canvas) BAG to smuggle into school… should the princess, once at school -gasp!- change her mind.

Once calmed down in the car she appeared more amenable to… what’s it called?  Oh yeah, reason.  I told her I know how she feels.  That my Grandma (Bubble Wow’s mom) once made me a Cinderella dress when I was a little girl, and I was mad because the glass slippers weren’t really glass, they were plastic.  That I hadn’t understood that things in the movies and real life had to be different.  For one, glass slippers would be painful and dangerous.  (Which somehow never gets mentioned in the Disney version.)   Furthermore, ClaraJane is right.  Elsa’s cape does trail glamorously well behind her.   And do you know WHY?  Because Elsa lives in a gigantic ICE CASTLE, all by herSELF.  And there are no Montessori children all over the place who might accidentally STEP on it.  And that I -ClaraJane’s mother- didn’t want that to happen because do you know why?  [Pause for dramatic effect… wait for her to ask “Why?”]  “Why?”  It would CHOKE you!

A few moments for the beautiful three-year-old wheels to grind around up in that priceless head of hers and, you guessed it; “I want to go back home and put on my Elsa dress and Elsa cape!”

Ah but not to worry right?  I just happen to have them right HERE in this BAG.  No problem.  UNTIL…

We get to school and start to change.  On goes the dress and… where’s the CAPE?  My precious CAPE.  No cape!  On the phone with Dear Husband, I learn that in the wake of my cool, calm, collected SuperMom morning he found said CAPE in a heap on the floor next to the compost by the front door (which incidentally I had also somehow left wide open).  I couldn’t believe it.  With his new phone he texted me a photo for evidence (of my madness apparently, although kindly he did not say as much). 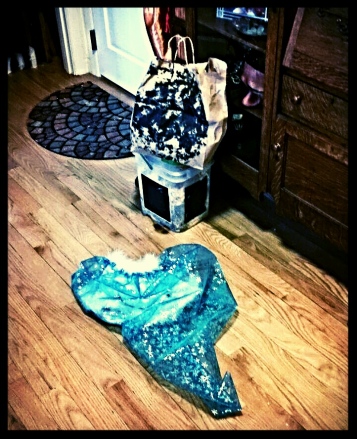 What to do.  What would you do?   LET IT GO?  (Sorry, had to go there.)  Nope not ME.  With my usual insane dogged determination I set the kids free in the school, and beat it back across town (in traffic this time… both ways), to deliver the PRECIOUS back to her highness.  But it’s not “her highness,” it’s my daughter.

When I arrive back at class and spy through the two-way mirror, the kids are having a special presentation by a dad with what to them must be a really old-timey CAMERA (a 35mm SLR or such).  I may be crazy but I’m not going to disturb an otherwise organized class of 3, 4 & 5 year olds over a piece of clothing.  But just to add insult to injury, as I’m standing outside the door with the Precious in hand, it’s ClaraJane’s turn to pose in front of the special camera-thingy for all her class to admire.  In her store-bought hand-me-down Cinderella dress. 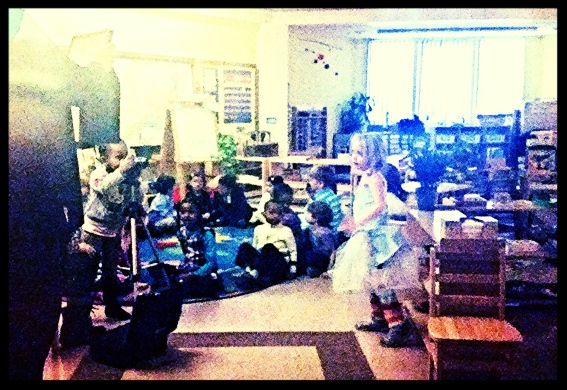 So close but so far.  First world problems I know!  I know.  And so, with the wince in my heart, I turn to go, and leave the thing in her cubby. 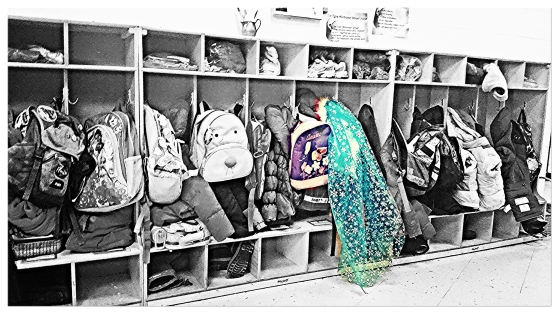