First They Came for the Muslims 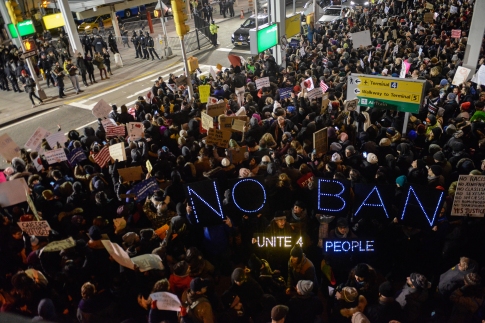 So this is already happening.  On Friday (1/27/17) F*cking Chumpity-Dumbass Dumphead literally ordered a ban on Muslims from entering the country!

Trump signed the executive order on Friday  that effectively denies entry to people from seven Muslim-majority countries, including those with green cards, who otherwise have permanent residence in the US.

Signing the order at the Pentagon, Trump said the move would help protect Americans from “terrorist” attacks.

That motherfucker is just perpetuating fear and division for personal gain.  Muslim refugees aren’t coming here to bomb us, even as we are actively bombing SEVEN countries worldwide.  Apparently he doesn’t know we are far more likely to get killed by that ever present danger; ARMED TODDLERS.

Within one day (Saturday 1/28), travelers trying to enter the country (with valid passports and visas!) started getting handcuffed and detained at our international airports. 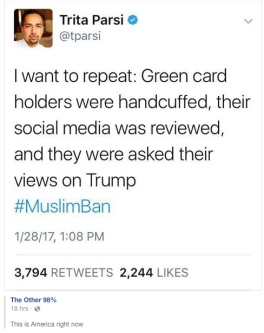 How did good citizens respond?

These thousands of people chanting are MUSIC TO MY EARS and I could listen to it for a long time.  (I can hardly wait for a recording artist to release a resistance song using this as rhythm and percussion.)

#FUCK THE WALL WE’LL TEAR IT DOWN!

#NO HATE! NO FEAR!  REFUGEES ARE WELCOME HERE!

#WHOSE STREETS? OUR STREETS?

Personally, I am amazed at how quickly and radically people mobilized at airports all around the country.  What incredible rapid flexibility, with NO NOTICE.  I am still processing the Women’s March from last weekend, and WOW.  It really worked.  It really was a KICKOFF PARTY of historical proportions.  It was a practice run for what we will apparently need EVERY DAMN DAY of this asshole’s “presidency.”

Ruling temporarily ends detention of travellers with valid visas and prohibits their removal from the US.

When We Fight We Win!

Here are some of the important, inspiring, courageous CHANTS:

Some of these might come in handy this afternoon when we stand in solidarity with our Muslim brothers and sisters at the demonstration in downtown Boston TODAY!

If I have time to make a sign today it will say;  “NOT ON MY WATCH!“